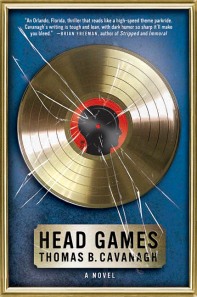 “This debut novel by an award-winning writer for children’s television has everything: dark humor, great suspense when the bad guys mark Garrity for pain and death, and heart in its poignant portrait of a terminally ill man trying to understand his teenage daughter. Readers who liked Peter Abrahams’s Oblivion, about an amnesiac detective, will eat this up.”

“Cavanagh’s ambitious debut has a terrific premise and many appealing touches, including an unbeatable cliffhanger.”

“…entertaining…Fans of the classic PI novel will hope to see more of this wonderfully crotchety protagonist—with or without Bob.”

“Carl Hiaasen and Donald Westlake readers will enjoy Cavanagh’s debut, which crackles with cranky commentary on one man’s cranial state of affairs.”

“…Cavanagh creates likeable characters you want to see in future installments and a plot that comes up with a surprise or two.”

–Sarah Weinman, Confessions of an Idiosyncratic Mind: Pick of the Week

“Cavanagh does a fantastic job of informing the reader of the symptoms of cancer, the side-effects of the medication, and the emotional struggles of a dying man in a fascinating and very real manner…The subject matter may be tough, but Cavanagh leaves you with the strong desire to live and make the most of the life you’ve been given. I don’t know if he plans on writing more books about Mike Garrity, but if he does, he’s already got one reader who will be sure to pick it up.”

“…a fast, gripping read. The supporting characters (like Garrity’s Boyz Klub-crazy teenage daughter) are sketched with just enough detail to propel the narrative, while the narrative is cleverly, even diabolically, constructed.”

“Carl Hiaasen fans will be thrilled to know there’s a new kid on the block. If you liked BASKET CASE you’ll flip over Tom Cavanagh’s new novel and demand a sequel. Cavanagh’s novel has it all; a sardonically and outrageously funny lead character who will rope you in by page one and take you on a wild ride you’ll never want to end. Truly, the best book I’ve read in a long time. Tom Cavanagh has a new and devoted fan in me.”

“Cavanagh infuses the classic private eye novel with a bit of dark humor, realistic dialogue and a clear vision of Central Florida…Best of all, Cavanagh puts at the center a likeable, complicated character…Cavanagh avoids cliches as he infuses Head Games with a sense of humor and twists in both plot and character. The author richly explores Mike’s tenuous relationship with his teenage daughter as the detective learns how to be a father while trying to cope with a life-threatening condition. Cavanagh skillfully weaves Mike’s illness into the plot without overwhelming the story. The tumor, which Mike has named Bob, becomes a metaphor for the deficiencies and medical conditions each of us has to deal with. The author takes us through the neighborhoods and streets of Orlando. That big mouse may be on the outskirts of the city, but Head Games is not about the tourists. Head Games is about the people who really call Orlando home.”

“Cavanagh’s writing owes a debt to Carl Hiaasen, except that he moves the setting to Orlando, home of Disney and boy-band central, but with an underbelly that tourists generally don’t see…The young characters, from Jennifer to the missing T.J., are well drawn, and both give teens someone to root for. Though the tribulations of a middle-aged man won’t be as compelling to them as to adults, the central mystery will be, and its twists and turns will propel readers to its last page.”

“Cavanagh has done a wonderful job with a tough subject, and a tough character. He doesn’t pull punches with the illness caused by the brain tumor. Mike’s illness is very real, and painful for him and those who love him. Mike’s life has also become very painful to him. There aren’t any easy solutions for Mike Garrity – in his life, his investigation, or his illness. He does his best to handle it all with humor and grace. There’s something about Garrity that draws people, and, will draw readers.”

“Cavangh’s debut novel was Murderland and I shall look it up soon, hoping to find another solid plot, believable characters and the true humanity and wickedly funny wit that I found in Head Games. …4 1/2”

“A very good mystery…Garrity is one tough cop. He doesn’t waste time on self pity and he doesn’t kid himself about his condition. And despite the medical overtones, Cavanagh has written with skill and humor so the book is loaded with heart, but never a downer…He is an author to watch.”

“HEAD GAMES is a unique fresh private investigative tale that grips readers from its opening line introducing the audience to Bob the tumor…and never slows down until the final confrontations. Readers will wonder if Mike will have the time to complete the case and reconcile with Jennifer even as Bob takes on a personality of his own. Mystery fans who want something different in their novels will enjoy Thomas B. Cavanagh as he plays HEAD GAMES with his protagonist (and the audience).”

“I’m hoping there’s more to come from Thomas B. Cavanagh because it’s hard enough to find talented new writers lately, and this one has lots more to tell us.”

“I told you he was good! That’s what popped into my head when I saw that Orlando resident, Thomas Cavanagh, has been published by Thomas Dunne Books, a division of St. Martin’s Minotaur…I reviewed his first book, “Murderland” (Hilliard & Harris, 2005) here in Book Notes a few years ago and I knew then he had talent. I even suggested that he try his hand at the misty land of literary fiction because Marjorie Kinnan Rawlings could use some company – the list of literary writers in Florida is slim. Perhaps one day he will. But right now, he’s enjoying his spot at the beginning of a great career in writing crime fiction. Cavanagh sets himself apart from the crowd of dime-a-dozen mystery writers by capturing the reader’s attention immediately with the confident handling of his material. The very first line of the book is, “I have a tumor in my head. I call it Bob.” Irresistible. With that simple line, Cavanagh has set up character and conflict…Cavanagh is definitely a writer to keep your eyes on. His protagonist, Mike Garrity, is being compared to John D. MacDonald’s Travis McGee character, the iconic hero who started the ball rolling on Florida’s eccentric detective fiction genre so many years ago. But somehow, I like Mike more. I just hope he lives.”

“An Orlando thriller that reads like a high-speed theme park ride. Cavanagh’s writing is tough and lean, with dark humor so sharp it’ll make you bleed.”

“Thomas Cavanagh takes what could have been a stock character, the burnt out ex-cop, and creates a wholly unique and complex man, fully realized and compelling. The main character’s black humor and the true voice of his internal dialogue distinguish Cavanagh’s book, and might make you think Cavanagh’s been a cop somewhere along the line. Relentless pacing, local color, mystery, and action–and folks you will root for as they crash against evil. The action and the mystery will keep you reading, but the characters will make you want a whole other book. Please tell us this is a series, with more to come. Cavanagh is another rich, strong voice from Florida, and there’s certainly room for more Florida crime fiction when it is as dynamic as Head Games.”

“Thomas Cavanagh is a great new talent in crime fiction. His voice is tough and tender, sad and funny, a writer equally adept at creating fast-paced action, believable dialogue, and a story with more twists than the latest dance routine of your favorite boy band. The make-believe city of Orlando deserves a crime writer with guts, imagination, and a sense of humor; Cavanagh has all three in spades.”

“Head Games is a next generation hard-boiled detective novel with a Travis McGee-styled hero whose sidekick is a brain-tumor named ‘Bob’. Flat-out funny, smart, and, refreshingly humane, this Florida thriller is set in the whacked-out pre-fab world of Orlando, between Sea World and Disney, where money talks, boy bands rule, and asking too many questions could get a dying man killed. This is a nail-biter with a heart.”

— N.M. Kelby, author of Whale Season, In the Company of Angels, and Theater of the Stars

“Head Games is a sharp and convincing new take on the private eye novel, underscored with the sobering tang of mortality. It’ll be interesting to see where Tom Cavanagh – and Mike Garrity – go from here.”

— Wallace Stroby, author of The Heartbreak Lounge and The Barbed-Wire Kiss

“Head Games is a first-rate detective story, even aside from its dead-on (no pun intended) portrayal of life with cancer (trust me, I know)…the author has created a memorable character–one whom we can only hope will part company with Bob and live to see another story. This one deserves an enthusiastic five thumbs-up!”

“A funny, debut thriller about a retired cop suffering from a brain tumor who agrees to investigate when the frontman for a boy band disappears, putting in jeopardy millions in ticket sales and endorsements. Highly recommended.”

“An inventive and ambitious mystery featuring a wryly humorous protagonist.”

“Cavanagh writes about a guy that you really care about. The fact that he has a brain tumor lends a sense of urgency to the job, to his relationships with his family, to the people with which he interacts. People may threaten him, but Garrity always has a trump card, “who cares, I am going to die any way.” But Cavanagh writes in a style that makes you want Garrity to care, to tie up the loose ends of his life, to find the boy, to save the day. And he does so at a very nice pace. Very well drawn characters, people that you care about with an unseen force that lends a lot of suspense. These are characters that I would love see again, with or without “Bob.” The effects of a brain tumor are handled well and, according to Cavanagh’s resources, well researched. It isn’t often that you have a main character with a death sentence, at least one that wasn’t the result of interactions with another human being. An unusual but extremely good premise. And what about the behind-the-scenes machine that keeps spitting out those Backstreet Boys, N-Sync, O-Town bands? You will have a front-row-center-seat look at that business; where they find the members, what is expected of them, the marketing, the tie-ins. How did I like it? This is one of the few novels that I could be seen reading at every opportunity. It is that good. In fact, the library is ordering Cavanagh’s first novel, Murderland, for me. I have found a new, excellent author (at least to me). Pick this book up, it is definitely worth your time.”